Our instructors are some of the best in class! We have instructors that can help with students of all types work to earn their certifications as well as a number of ratings and endorsements, including instrument, high performance, complex, tail-wheel, and multi-engine. 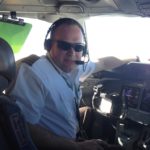 Mike Pratt moved to Louisville in 1998 as a new-hire pilot with a Louisville based international airline. While flying as a DC-8 flight engineer, Mike attended graduate school at the University of Nebraska and obtained his Master’s Degree. As a graduation requirement, Mike had to write a business plan for a start-up company of his choice. Since Mike had rented general aviation aircraft all through high school and all through college at Michigan State University, he knew the flight school and aircraft rental industry firsthand. Using the knowledge of his flight training and his graduate classes, Mike wrote a business plan for a flight training and aircraft rental operation. The professor thought the business model was strong and recommended that Mike follow up on this plan and start this flight school upon receiving his Master’s Degree. Nineteen years later the flight school is flourishing and owns several dealer licenses and aircraft. Mike is now an MD-11 captain with over 12,000 flight hours and still flies small airplanes in his free time when not flying around the globe. Mike is a firm believer that the student pilot and his/her instructor should have a lifelong bond and friendship as aviators. Should you have any questions, concerns, or comments on flight training or Louisville Aviation, please don’t hesitate to email Mike at mpratt@louisvilleaviation.com.

Brad Biggers is a Louisville native who began his flying career at Bowman Field in 1995 and has been hooked on flying ever since. After flight instructing full time at Louisville Aviation for a couple of years, he flew Beech 1900’s and Dash 8’s for a regional airline out of Cleveland, OH, and Newark, NJ. Brad is currently an Airbus A300 first officer with a major airline based out of Louisville, Kentucky and is a designated pilot examiner (DPE) for the FAA. 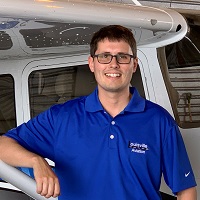 Brian is a local DuPont Manual grad who grew up spending weekends at Bowman field and making the annual pilgrimage to Oshkosh with his family. After graduating from the University of Kentucky, he began a career in IT that landed him downtown under the flight path of UPS jets – and found his eyes looking outside and his dreams shifting skyward. Brian took his first flight lesson at Louisville Aviation in 2017, and since then has pursued his passion earning his certificates and ratings; as a CFI, he enjoys sharing the joy of aviation, mentoring his students, and helping their dreams take flight. 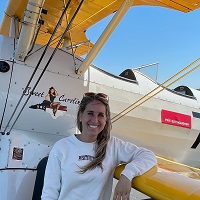 Mary grew up in Kansas loving aviation. After teaching overseas for a few years she returned to the US and began her aviation career in December 2019 at Louisville Aviation. After her first discovery flight, she fell in love with aviation and dropped everything to pursue flying. She now enjoys being able to share her experiences with a growing family of pilots and friends. Mary hopes to share her love of flying with others and hopes to open their eyes to a new beautiful world in the skies. Her passion is to produce safe pilots and to open the door to the many experiences aviation has to offer. 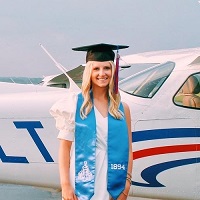 Ainsley was born and raised in New Orleans. She completed all of her flight training at Louisiana Tech University and received a bachelor’s in Professional Aviation with minors in Aviation management and business administration. As a CFI, Ainsley hopes to share her passion for aviation with her students. Aviation has been in Ainsley’s blood since her first flight at 9 weeks old, since then she has traveled to over 35 countries. In her free time, she will be exploring Louisville and traveling to new places. 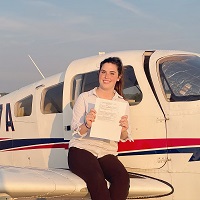 Paige earned her private pilot license in 2017 and just recently became a CFI in 2021. She grew up with family members in aviation and looks forward to following in their footsteps. Paige is excited to start this new chapter as a CFI and meet more people with the same love in aviation. 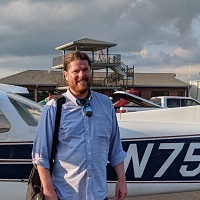 Isaac Fife, Certified Flight Instructor- Instrument and Multi-engine Instructor, was first inspired to fly by his grandfather who flew with the Flying Tigers. He is a graduate of Transylvania University and earned his Private Pilot’s license in his hometown of Henderson, KY. He later earned his CFI, CFII, and MEI in Clearwater, Florida. Isaac now wants to share and expand his passion for aviation by teaching and instructing new pilots. 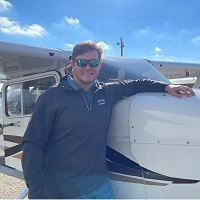 Philip Hockaday is a Louisville native who has aspired to be an aviator from the times he would travel to air shows with his father as a young child. After graduating from South Oldham High School, he pursued a Bachelor of Science in Aerospace with a concentration in Professional Pilot as well as his flight training from Middle Tennessee State University. As a Certified Flight Instructor, he enjoys sharing his love and passion for aviation with others and helping to make their dreams and goals a reality. 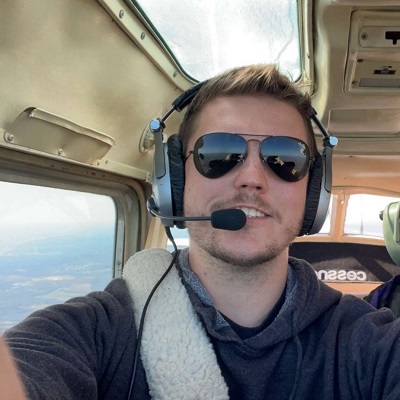 Originally from Shelby County, Kentucky, Cody became interested in aviation while in middle school. He attended Eastern Kentucky University and earned a bachelor’s degree in Aviation and started his flying career. Cody completed his private, instrument, commercial, and CFI with Louisville Aviation. He is married and a father of two young boys (3.5 years and 3.5 months), and his oldest is already in love with airplanes. 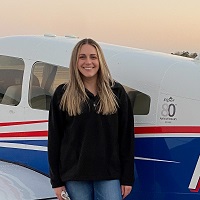 Morgan grew up as a military brat living in a variety of locations. She graduated high school and college in Louisiana and earned her degree in Professional Aviation from Louisiana Tech University in Ruston, LA. Morgan’s love for aviation and traveling began at a young age, her dad is a retired Marine Corps helicopter pilot and is currently a B777 pilot for FedEx and her mother has been a flight attendant for Delta Airlines for over 30 years. Morgan is excited to instill her passion for aviation in her students and looks forward to exploring her new home in Louisville. 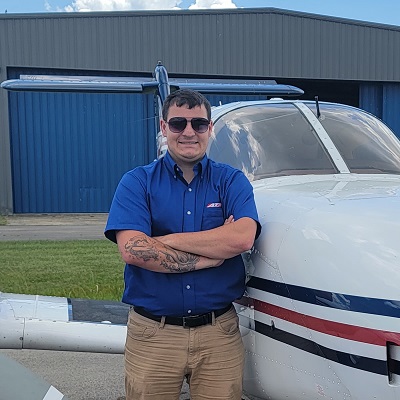 Tylan was born in Indiana, in June 1997. Tylan graduated from Floyd Central High School in Dec 2014 and joined the Marine Corps. During his time in the Marine Corps, he was an Air Traffic Controller. He spent three years in Okinawa, Japan, and one year in San Deigo before getting out of the Marines in 2020. He then started at ATP flight school in Jan of 2021 where he got certificates including CFI, CFII, and MEI. Tylan now wants to teach and gain experience to one day move on to flying for UPS. 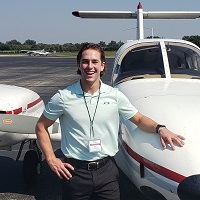 Tyler is a Louisville native who began his flight training in 2019 at Bowman Field and continued his flight training at Eastern Kentucky University. Now, a college graduate with a bachelor’s degree in professional aviation and a certified flight instructor, he has returned to his hometown to teach students at the same airport he took his first flight. After reaching his 1000-hour R-ATP, Tyler plans to fly for a regional airline and work towards Southwest Airlines. 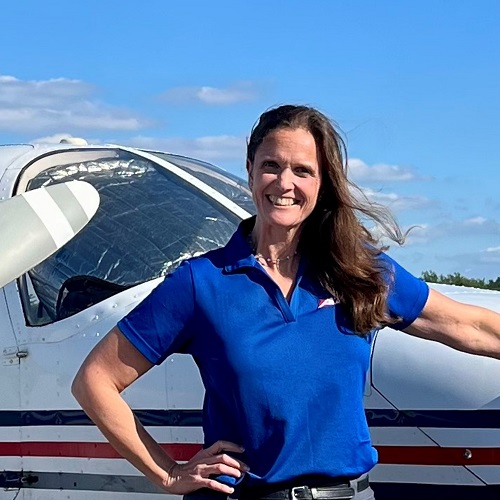 Karyn is a Kentucky native and has been in Louisville for over 20 years. Formerly a structural designer, she moved her skills to teach through the theater at Sacred Heart School for the Arts and Trinity High School. After a discovery flight, she knew a career change was in order, and with the support of her family, attended flight school full-time to make this dream a reality. Since then she has earned her CFI, and CFII and is working on her MEI. With a daughter that is also in flight school, Karyn hopes to share her love for aviation with the next generation. 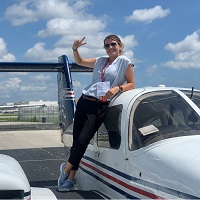 Amanda was born in Cincinnati and grew up in the hills of the Ohio valley. She has a background in education and creative writing, completing her Bachelor’s degree at the University of Cincinnati in 2011. Feeling unfulfilled in her career, she began training in 2018 at Daytona Beach International with ATP from 0 flight time to 250 hours and finished the program in 11 months. She received her CFI, CFII, MEI, and IGI, and holds a Gold Seal Instructor and 2-year designation as well. Since 2019, she has instructed in Nashville, Tennessee, and the Chicago metropolitan area. She recently moved to Kentucky to continue her passion for instruction and her ultimate goal to become a DPE and continue passing on her knowledge to new pilots aspiring for safety in flight. In her spare time when she isn’t flying and teaching ground school, she enjoys singing, painting, and taking care of her dog, Cash Bug. She enjoys spending lots of time outdoors, camping, kayaking, and hiking. She is also a published author of two children’s books as well as poetry published in various student journals. 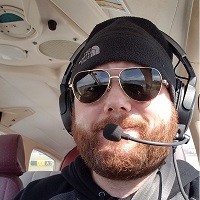 Tom is a transplant from Minnesota who relocated to Louisville where he works as a ground instructor at a major airline teaching aircraft systems. He has a long history of instruction serving as a field training officer in EMS and law enforcement, a police department firearms instructor and general subjects law enforcement instructor during a 20-year career in public safety, and a flight instructor in part 141 and part 61 programs. In 2017 Tom went back to college where he earned a second degree in commercial aviation from Academy College in Minneapolis. Tom holds CFI, CFII, AGI, and IGI instructor ratings and still serves as an adjunct instructor at a nationally accredited college aviation program in Minneapolis. 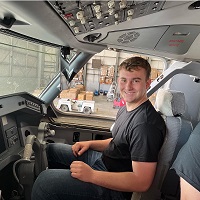 Alek graduated high school with no idea what he wanted to do until he took a discovery flight. After flying for the first time he got the flying bug and his aviation career began. Alek attended ATP and finished in October of 2022 where he got certificates including CFI and CFII. Alek now enjoys instructing at Louisville Aviation where his love for flying continues to grow. 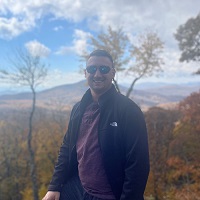 Andrew grew up in Florida where he worked at an airport fueling planes when he got out of high school. From there, he worked towards his private pilot’s license and decided he wanted to make a career out of flying. Andrew moved to Louisville in hopes to share his love of flying with his students and continue on his career path to work for the airlines.